Examples of In-Person Sales Pitches (Pitching your Business or Product)


The essentials of what makes an in-person sales pitch most effective can be boiled down to a few key ingredients:

While it is, of course, redundant to attempt to reduce the components of a successful pitch into a formula, an amalgamation of these qualities is sure to stand a prospective pitcher in good stead.

This article will look at some of the most successful in-person sales pitches from television shows and startup competitions and seek to examine their best qualities, and how they are used to successfully attract a potential client, customer, or investor.

The most obvious place to begin would be Levi Roots's infamous pitch on the UK television series, Dragon's Den. Cheerful, playful, and animated, Roots' captivating personality certainly shone through as he sought to gain investment for his homemade sauce.

He is proof that the pitcher's personality can be equally as important as the product or business they are pitching. Nowhere was this clearer than his bold decision to begin with a song that he had composed, with lyrics describing the product – a risk undoubtedly, but one that surely paid off.

But beyond just being a vehicle for Roots' charming personality, his song actually pointed to something far more important, the power of an impressive opening. Roots could have quite easily begun with a more common introduction but he opted for something that would set him apart and, in doing so, he immediately enchanted his audience.

Of course, Roots' personality and his enthralling opening would mean nothing without a quality product, but they did immediately separate him from the pack and gave him an immediate platform to showcase his sauce. These qualities have surely contributed to the success Levi has found since his appearance on the show.

The next pitch, also from Dragon's Den, is another successful example of how to gain investment, but in a completely different manner to Roots. Whereas Roots began with a song, ex-teacher James Holmes opened with anecdotes of his own personal experiences ('I've been a teacher for around seven years...there's nothing I like more than being in the classroom...I found that my workload meant I was focusing more on paperwork').

He immediately made it clear that he has an acute awareness of the market – this is a product for teachers, made by a teacher.

The other keyword to note from this pitch is concision, or efficiency, both in the pitch itself and in his demonstration of the product. He spoke in a firm, succinct language, summarizing the essentials of his product, while also showcasing the striking speed of the printer he had brought with him. 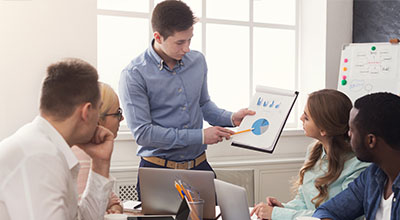 The Dragons, this time, were less captivated by the man, but more the competence, professionalism, and expertise exhibited before them.

Holmes was also sure to provide proof points, referencing recognizable examples of industry achievements and quoting already-interested customers. In doing so, he readily made himself a reliable pitcher.

Like Holmes, Julie and Davy Grey also secured a hefty investment on the show, impressing the Dragons with their efficient and effective plastic staple gun. The success of their pitch, however, relied on their utter comprehension and understanding of the marketplace. While the pair holds over thirty years of experience in their industry, it is not so much that they have this experience, but that they demonstrated it, vocally and physically.

The sharp quip, for instance, by Julie Grey regarding her husband, 'he's a bit slow at getting things done', may seem a witty and merely humorous remark, but it also allowed her to speak to their immense experience in the field.

It may have taken them a while to make the product, but all the knowledge they had gained through decades in their industry makes them a trustworthy investment. She cunningly turned what might have been a potential criticism into one of their greatest strengths.

'Sharks, milk today means something totally different than what the milkman used to deliver to our homes,' Ari Tolwin proudly declared, as he and his business partner, Joe Savino, pitched their plant-based milk product on Shark Tank US.

While hugely different in terms of style to the three previous examples, what this pitch does share with the others are the core elements of personality, concision, and an awareness of the market.

Tolwin and Savino hit a theme early and stuck with it, they wore their own branding and they readily committed to cow-themed puns throughout ('Mooooove on over cow's milk', 'who wants to milk this deal for all its worth?'). While this might be unattractive to some, it did give them a clear identity.

But they also, quite savvily, knew their audience. They were pitching to the billionaire investor Mark Cuban, who has notoriously built an extensive portfolio of vegan products. Therefore, Tolwin and Savino's decision to place a heavy emphasis on 'reducing perishable loss' and the 'limitless' options for plant-based milk was a wise one – they were playing to the room and knew exactly what might be likely to get a wealthy investor onboard.

Green clearly utilized his own assets, his presenter-like voice and inviting personality shone as he detailed his event planning startup. But Green's greatest trick, possibly, was his use of emphasis, delicately placed on specific words (especially we's and you's) for maximum effect:

His manner was appealing, his speech hit all the critical bullet points, and his words appealed to his listener.

What all these pitches had in common was the demonstration of skilled presenting, where each pitcher understood the minds of their audience and created a message to resonate with what's already there.

Each pitch bore a strong personality, whether it be extroverted and warm, or intimate and detailed, and each had a clear, concise structure that hit every mark that it had set out to – it seemed that not a breath was wasted.

Each has proven that through a combination of personality, concision, precision, and a comprehensive understanding of one's business or product, it is possible to captivate an intended audience and secure investment.