Motion Sickness in VR: Why it happens and how to minimise it


Some people experience motion sickness in VR, which means when they put on a headset and enter a virtual world they feel dizzy or nauseous. If you’re one of these people who has experienced VR motion sickness, that doesn’t mean you will forever experience it. It’s possible to mitigate feelings of nausea and even overcome the problem altogether.

In this blog, we look at what VR motion sickness is, what causes it, and how to minimise it so you can enjoy your favourite games and simulations.

What is motion sickness in VR?

VR motion sickness happens when your brain receives conflicting signals about movement in the environment around you, and your body’s relation to it. In VR, this essentially means that if you are standing still and the virtual environment around you is moving, you disturb the brain’s equilibrium and you start to feel nauseous.

While nausea and dizziness are the most common symptoms of motion sickness in VR, like with other types of simulator sickness, there are other symptoms such as headaches, sweating, feeling tired, eye strain and a general lack of balance. Studies have also shown that user’s don’t always feel the effects and overcome them instantly, and may actually start to feel ill for up to several hours after leaving the virtual world. 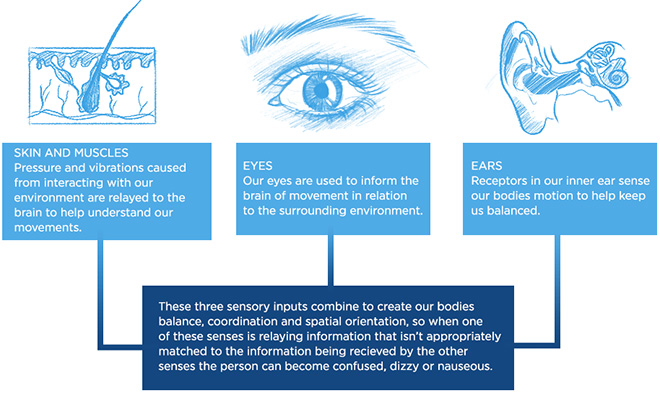 Image from VR Sickness: What it is and How to Stop It

There are also individual differences in susceptibility to getting VR sickness. For example, women are more susceptible than men to experience nausea in VR, which could be due to hormonal differences, women having a wider field of view than men, or because of gender differences in depth cue recognition.

Age may also be a factor, with recent research suggesting that adults aged 50+ are more susceptible to VR sickness than younger users. The same studies have found that once users have developed a level of familiarity with using VR, the likelihood of them developing motion sickness in VR is reduced.

As the VR market grows, motion sickness is potentially a major barrier to adoption for the technology. While we can’t know yet the exact number of people who are likely to be affected by motion sickness, software engineers who develop VR or AR environments typically assume that 25% of users will experience it. This is partly based on data showing that 25% of people experience motion sickness on an aeroplane while traveling through turbulence at low altitude.

Of course, the extent to which developers plan for VR sickness also depends on what they are building - games require a lot more movement of the environment in VR compared to delivering a presentation, for example.

There are several factors to consider as to why motion sickness in VR occurs and what influences it, and it’s helpful to consider each when creating VR experiences so that we can minimise the possibility of users experiencing it.

The type of headset

The type of headset and tracking plays a big part in whether someone will experience motion sickness in VR. The first VR headsets featured 3-degrees of freedom tracking (3DoF), which means that you can look up, down, and to the sides in 360-degrees.

You couldn’t walk around whilst in VR and the scene wouldn’t move with you if you did, resulting in a feeling of disorientation and unbalance (and perhaps a bruised leg from walking into your corner table). While 3DoF headsets are brilliant for viewing more static 360-degree videos and images, they aren’t built for the user to move in the 3D environment. 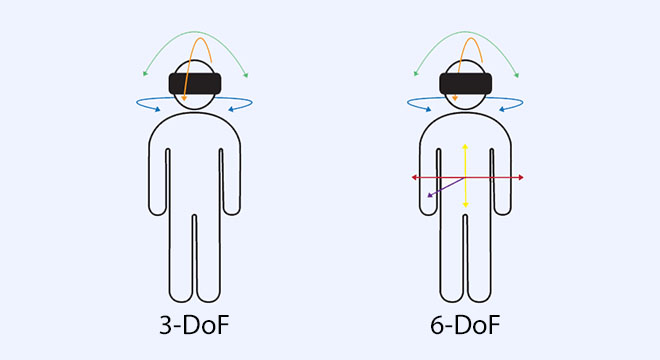 6-degrees of freedom tracking (6DoF) or spatial tracking, can help solve this problem. Headsets with 6DoF enable users greater freedom of movement within the virtual environment, and the environment around them will adjust accordinging. This reduces the feeling of disorientation by providing you a better sense of presence and minimising those conflicting signals being sent to your brain that cause motion sickness.

The type of controller

Another factor that influences VR motion sickness is the use and type of controller. A few years ago, only high-end headsets had controllers, but thankfully these are much more widespread now and help to lessen sensory conflict.

Having hands in the virtual world and being able to see them is less disorientating than looking down in VR and not seeing anything you’d normally expect.

Latency in VR is one of the biggest contributing factors to motion sickness. Latency is the time it takes for movement to register in-app and can trigger those signals to your brain that something isn’t quite right. If the display gets the signal too late, the equilibrium becomes confused because your body movements and actions don’t match with what you are seeing or hearing.

Oculus spent years researching the effects of latency on VR experiences and found that most people were comfortable with the 13 milliseconds delay that’s created by 90Hz display panels. This then became the industry standard for years. There are now headsets available that offer faster displays, such as the Valve Index that allows users to adjust between 80Hz, 90Hz, 120Hz and 144Hz. As the industry develops, the speed of latency will likely decrease, which will significantly help with the problem of motion sickness.

Image from VR Sickness: What it is and How to Stop It

Another element to consider is that motion sickness in VR could occur because of the unfamiliar eye motion that is required to keep the virtual scene stable on the retina.

If the virtual environment moves differently to what the eye expects, there’s a conflict in what the brain expects the eye to see and what it actually sees. As such, the eyes must move differently to how they normally do to stablise the image in VR on the retina - and it is this new movement that influences motion sickness.

One of the most interesting factors that influence motion sickness in VR is around postural instability. As animals, maintaining posture and being stable is one of our key goals and in circumstances where we have not yet learned to keep our balance, we tend to become sick. This can most easily be thought of in terms of people who become seasick - their bodies are trying to find their balance in a new circumstance.

In VR, if the virtual scene is moving forward like on a rollercoaster for example, the user would naturally lean forward with it in the real world. However, in VR their body hasn’t moved forward in the same way as it would on a real rollercoaster and this is a novel situation for the body to find its balance in, therefore postural instability and motion sickness may occur.

How can you minimise VR motion sickness?

Now you know a little more about the factors that contribute to motion sickness in VR, it’s easier to think of ways you can go about minimising the chances of experiencing it.

When you sit down, you naturally restrict your body’s movements so when you use VR whilst sitting down, you minimise the risk of being disorientated by your real-life movements and what you see in VR. Sitting down will help with your postural stability, which is especially important if you’re a new VR user. 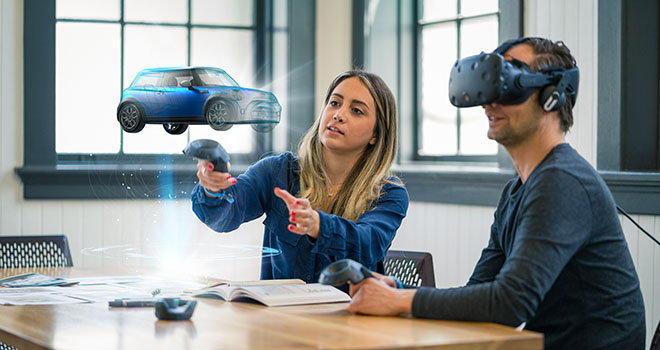 Stop VR experiences if they have significant latency or glitches

If you’re using VR and notice significant latency or glitches, try restarting your headset and app, and if this doesn’t fix the issue then stop using the headset. When movements are choppy, erratic or generally glitching, even the most seasoned VR users are more likely to experience motion sickness because of how disorientating this can be for the body.

Choose the right headset for you

If you’re prone to motion sickness more generally, before you start using VR, consider a headset that’s likely to minimise the risk of feeling motion sickness in VR. For example, headsets such as the HTC Vive have 6DOF, which will help you feel more orientated when moving your head or body in VR, as the virtual scene will move with you.

Sometimes there is simply a sensory overload when experiencing a new, immersive experience. By lowering the brightness of your headset, you reduce the sensory input a little, which could help your equilibrium adjust more easily.

If your headset doesn’t fit right, you’ll likely be viewing an experience through unfocused lenses, which can disorientate you as your brain will have to work harder to interpret what it is seeing and experiencing. When it’s already figuring out postural stability, the disconnect between real-life movement and what you’re experiencing in VR, you want to avoid your body having to figure out anything extra.

Make sure the headset is firmly on your head and adjust the lenses so you have a clear image before you enter a VR experience. If you wear glasses, insert a spacer that often comes with VR headsets, so that you can wear your glasses in VR.

Take it slowly and control your breathing

Start off with games or simulations where there is little movement, such as 3DOF where the virtual scene around you is relatively static. Experiences where you control the speed or environment will also help minimise motion sickness as your body knows what to expect and when.

If you feel nervous about experiencing nausea in VR, you may also be subconsciously holding your breath in anticipation, so don’t forget to breathe as normal!

Don’t use VR if you have an ear infection

The body’s sense of balance and equilibrium is controlled in part by our ears. Therefore, if you have an internal problem with your ears such as an infection then your balance may already be affected, and this will likely be heightened in VR as your body has to work harder to be orientated.

As with other forms of motion sickness, your body does gradually adapt. If you spend a couple of days on a boat, for example, your body will most likely have adapted by the time you get off. The same applies to motion sickness in VR - as your body becomes more familiar with VR, it will adapt and become used to the sensory input, and you won’t experience motion sickness anymore.

Try gradually increasing the time you spent in VR, such as 5 minutes every couple of days for one week, then trying 10 minutes twice a week the next week, and so on. Aim for 15 minutes at one-time, built up across a few weeks, and you shouldn’t experience VR motion sickness anymore.

If you’re someone who experienced VR motion sickness the first time you tried VR, you aren’t alone, but don’t let it put you off VR for life. There are a number of factors that come into play as to why you experienced motion sickness in VR, some of which are the responsibility of developers, and others which simply require your body adjusting to this novel experience.

Over time, your body will seamlessly adjust to being in VR as your brain and body have developed an understanding of what it’s experiencing.

To ease yourself into VR, try some of our 3DOF experiences in one of our courses.