How VirtualSpeech replicated the Vodafone UK Pavilion in VR for employees to practice presentation skills in their Learning Week and beyond.

Improve employee presentation skills and confidence by re-creating the Vodafone Pavilion in VR.

Vodafone is a global leader in technology communications through mobile, broadband and TV. The key goal for the team at VirtualSpeech was to re-create the Vodafone UK Pavilion in virtual reality (VR), so that employees could practice their public speaking skills in the safety of the virtual world, before delivering a speech in real life.

In VR, they can practice in various virtual environments, upload their own presentation slides and notes, receive instant AI-powered feedback, as well as track progress within the app. Managers can also track learner completion and progress, and more easily measure ROI.

The Pavilion itself is a large, conference room venue that's often used for in-person training, with a complex layout and room for a large number of attendees. The aim was for the virtual simulation to be complete in time to demo at Vodafone Learning Week, and continue to be used for months afterwards as a tool for communications training.

A secondary goal was to deploy existing, off-the-shelf VirtualSpeech training scenarios and features alongside the Pavilion simulation, to upskill employees and give them a chance to practice public speaking in a range of different scenarios.

With the Learning Week fast approaching, the VirtualSpeech team had around 6 weeks to re-create the pavilion in VR. After visiting the site and taking photos of the venue, the team got to work with designing the initial layout and texturing the scene.

After frequently updating Vodafone with progress of the build and implementing feedback, Vodafone and VirtualSpeech were happy with the final results and the scene was fully rendered. Then, the virtual audience was added into the scene and Vodafone branding added to other areas of the app. The app was then ready for Vodafone employees to start using with their Oculus Go headsets.

Example of the Pavilion in real life compared to in VR

Building the Pavilion in VR

Above: VR re-creation of the Pavilion. Below: Virtual audience added to the Pavilion. Virtual buttons can also be seen, which trigger the features described below, such as the speech analysis. 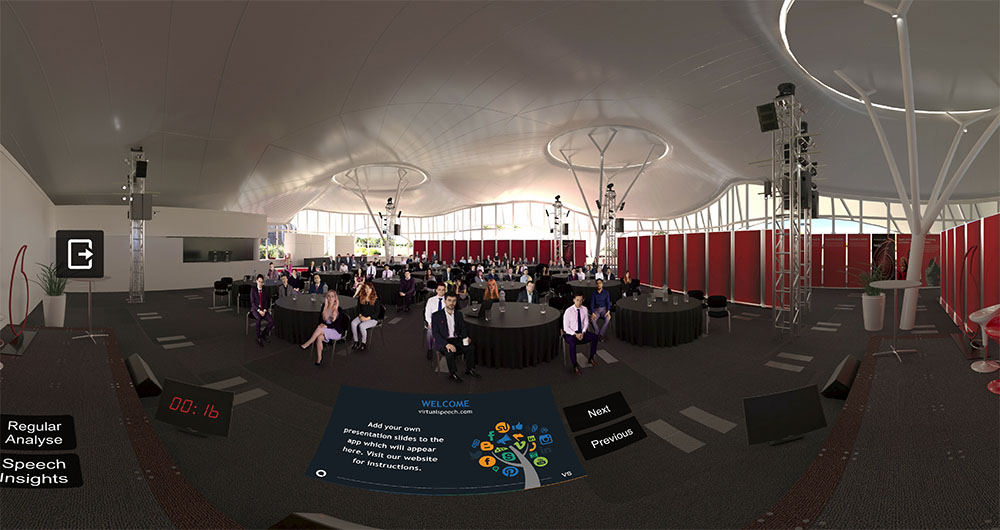 Along with the audience, several features were added into the simulation to increase the realism and effectiveness of employees’ practice, and provide them with useful feedback to evaluate their performance. Some of these features include:

Logistically, Vodafone use several Oculus Go headsets with this initiative, which are shared amongst employees on a needs-be basis. Using an Oculus Go for this type of training is ideal as it doesn’t require any external cables or hardware, and is easy to travel with.

Feedback from the first few months of use has been very positive, with the average time each employee has spent in-app of 36 minutes. The majority of this time was spent in the Pavilion room, as well as the VirtualSpeech meeting and presentations rooms.

A brief user survey conducted within the app showed that 93% of employees would recommend VirtualSpeech to a colleague. This is really encouraging for a new technology that very few employees will have used before.

A further 91% of respondents would like to see more VR training at Vodafone, which is a positive signal for the engagement and effectiveness of VR learning experiences as a whole.

With this project, Vodafone UK have been able to introduce VR soft skills training into the organisation in a structured and effective way.

Benefits of the VR training experience